Titel: From CRISPR Biology to Technologies 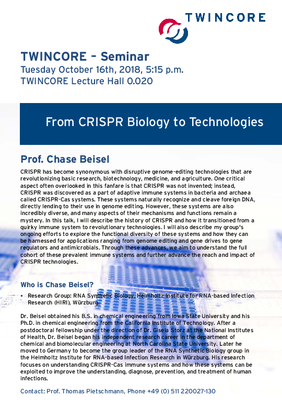 ABSTRACT: CRISPR has become synonymous with disruptive genome-editing technologies that are revolutionizing basic research, biotechnology, medicine, and agriculture. One critical aspect often overlooked in this fanfare is that CRISPR was not invented; instead, CRISPR was discovered as a part of adaptive immune systems in bacteria and archaea called CRISPR-Cas systems. These systems naturally recognize and cleave foreign DNA, directly lending to their use in genome editing. However, these systems are also incredibly diverse, and many aspects of their mechanisms and functions remain a mystery. In this talk, I will describe the history of CRISPR and how it transitioned from a quirky immune system to revolutionary technologies. I will also describe my group's ongoing efforts to explore the functional diversity of these systems and how they can be harnessed for applications ranging from genome editing and gene drives to gene regulators and antimicrobials. Through these advances, we aim to understand the full cohort of these prevalent immune systems and further advance the reach and impact of CRISPR technologies.

BRIEF CV: Dr. Beisel obtained his B.S. in chemical engineering from Iowa State University and his Ph.D. in chemical engineering from the California Institute of Technology. After completing a two-year postdoctoral fellowship under the direction of Dr. Gisela Storz at the National Institutes of Health, Dr. Beisel began his independent research career in the department of chemical and biomolecular engineering at North Carolina State University. After being promoted to Associate Professor with tenure, he moved to Germany to become the group leader of the RNA Synthetic Biology group in the Helmholtz Institute for RNA-based Infection Research in Würzburg. His research focuses on understanding CRISPR-Cas immune systems and how these systems can be exploited to improve the understanding, diagnose, prevention, and treatment of human infections.